skip to main | skip to sidebar

d. Strategies and actions for incorporating Digital Literacy into K-12 and higher education.
This is specifically where CSLA recommendations can be directed.
Doug Achterman's statistics related to equitable access to school libraries should be of interest to the above mentioned Leadership Council and Advisory Committee.


WHEREAS Information and Communications Technologies (ICT) Digital Literacy is a defining component of California's competitiveness for a knowledge-based economy and is growing in importance to attract capital investment that will generate higher quality jobs; and
........
complete text at:
http://gov.ca.gov/executive-order/12393/
Posted by Jackie S, 2.0 project manager at 10:26 AM No comments:

Wait, let me start over.

Wait, let me start over again.

Are you alive, and curious?

Okay, that's better. I think this is worth 13 minutes of your time. Go watch it, then come back.
http://www.wolframalpha.com/screencast/introducingwolframalpha.html

I believe Wolfram Alpha is supposed to go live tomorrow. It's obviously still very, very new (will they change its name to Wolfram Beta later? That will mess up the URL's. Kidding.) It will be interesting to see what kinds of searches lend themselves to this more computational approach and what kinds don't, but I still think this is another big step in how humans find, access, digest and repurpose information. Designed to "compute answers to your specific questions," this once again should make us examine what we are doing in our classrooms, and how we should best prepare our students to be successful in an age with this much computational firepower.

What facts (discrete pieces of information?) do we need to know in order to develop deep understandings of important concepts, and what facts can we just google or wolfram (or will the verb be alpha)? What previously unknown relationships might be teased out of the data by the Wolfrom Alpha algorithms, or what will humans looking at this data in new and unique ways discover? What new questions will we learn to ask, or will we learn to ask old questions in new ways? (You can also view a much longer talk by Stephen Wolfram at the Berkman Center.)
Posted by Jackie S, 2.0 project manager at 7:57 AM No comments:

If you already have a Facebook account, you may want to become a fan of NASA. It is a fun way to keep up with what is happening and to have access to some really fine images. My favorite is the Jupiter rings.

Recommendation: If/when you become a NASA fan, comment about how you and your students are using the NASA information, images, and what else you'd like to see. This is a good opportunity to be visible as a librarian. Be sure to reference curriculum standards that support projects using the NASA information.
Posted by Jackie S, 2.0 project manager at 9:32 PM No comments:

Brewster Kahle, director and co-founder of the Internet Archive, spoke on "Universal Access to Knowledge" at the May 13th BayNet Libraries meeting in San Francisco. Brewster's presentation was an updated version of his earlier TED.com presentation, which is available on video.

"Now is a good time to be a librarian" says Brewster. A lot is happening. There are struggles over who will own what (content). This is also a time to determine how to spend money better for libraries.

The Internet Archives is a non-profit organization that was created in San Francisco in 1996. It has grown in several ways. It now has 18 book scanning centers on several continents, including a center in San Francisco. The Internet Archives captures and stores:
Worried that these archives are vulnerable? It was comforting to learn that there are now a few "swap" backups, although Brewster would sleep better if there were 4-5 server locations that keep and maintain complete copies.

Open Content. Google is the biggest competitor to the Internet Archives, but has a commercial business plan rather than a non-profit approach. Brewster urged the audience to petition Congress to "Let the Orphans free". Orphan works are items whose copyrights are unclaimed. Pending legislation is controversial because it favors Google and keeps these works from being open to all. Internet Archives has recently hired Peter Brantly to get activists on board with the Open Content issue, including digitization, the Google Book Search Settlement, and the future of books and libraries .

Check out the site. You could easily spend hours on it just exploring. Start with a look at the "Wayback Machine" to see what your website looked like 10-15 years ago. There is a K-12 Web Archiving Project, sponsored by the Internet Archives, the Library of Congress, and the California Digital Library. Enjoy! 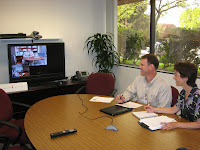 FYI: Here is a photo taken during a videoconference between Santa Clara and Orange County Offices of Education. CSLA Communications VP Pete Doering (Santa Clara COE) and 2.0 Project Manager Jackie Siminitus meet with Glen Warren (Orange CDE). Can you see Glen in the TV monitor? Most Communication Committee work takes place via e-mail, but there is nothing like real time conversations.

How many members are using interactive video in their library, district, or county offices? How are you using it?
Posted by Jackie S, 2.0 project manager at 3:13 PM No comments:

Create images with groups of words that appear in your text. Select fonts, colors to enhance your word image. Words that appear more frequently in your text appear larger or figure more prominently in your word cloud. Go ahead and play! Copy and paste your lesson plan or introductory description for "Information Literacy" or your school's rules. :)

You can add your image to the gallery, print the image, or get the html code for it. Below are Wordle images created for the Discovering Assistive Technology and School Library Learning 2.0 tutorials and the Gift Guide.

On on Thursday, April 30, Capstone Press hosted a 1/2 hour webcast on "5 Steps to Advocate for Stimulus Dollars for Your Library". The program is archived and handouts are on their website and other websites including the ALA "Know Your Stimulus" site that they referenced. This post has some highlights and links. Kudos to Capstone Press for offering the webcast and supporting material.

---
NOW is the time to ACT. You need to act LOCALLY. Read up on the stimulus dollars and the guidelines from ALA, Capstone Press, and others. You need to create a proposal for your specific school or districtwide library program. No one else will do this for you (unless you have or create a library or Friends of the Library team).